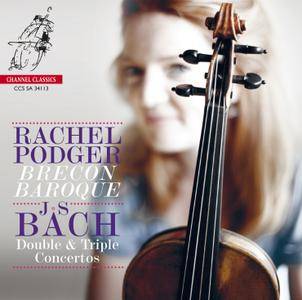 The dynamic ensemble Brecon Baroque was founded in 2007 by violinist and director Rachel Podger as resident ensemble at her annual Brecon Baroque Festival.The international line-up consists of some of the leading lights in the period-instrument world,such as cellist Alison McGillivray,flautist Katy Bircher,oboist Alexandra Bellamy and violist Jane Rogers,as well as some of Rachel's former students who now occupy leading positions in many of Europe's finest ensembles:violinists Bojan Cicic and Johannes Pramsohler. 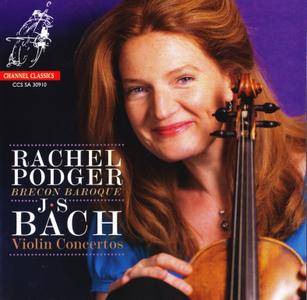 For those who already appreciate Rachel Podger's unique brand of magic I'll just say that this return to recorded Bach is lovely and all that one could hope for. All that one looks for is here, and there is more. For those who are not familiar with Rachel Podger, she is a unique voice among violinists. She has absorbed the principles of late Baroque performance practice and made them a part of herself, so that the articulation and inflection of that rhetorical approach to music flows from her as a natural idiom of expression. 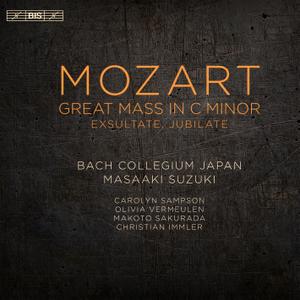 Masaaki Suzuki, Bach Collegium Japan - Mozart: Great Mass in C minor / Exsultate, Jubilate (2016)
SACD Rip | SACD ISO | DST64 2.0 & 5.1 > 1-bit/2.8224 MHz | 71:17 min | PDF Booklet | 3,47 GB
or DSD64 2.0 Stereo (from SACD-ISO to Tracks.dsf) > 1-bit/2.8224 MHz | PDF Booklet | 1,61 GB
or FLAC Stereo (carefully converted & encoded to tracks) 24bit/96 kHz | PDF Booklet | 1,52 GB
Features Stereo and Multichannel Surround Sound | BIS Records AB # BIS-2171 SACD
As the mysterious opening bars of the Kyrie gradually emerge into the light, we know that this recording of Mozart’s glorious Great Mass in C minor is a special one: the tempi perfect, the unfolding drama of the choral writing so carefully judged, and, above it all, the crystalline beauty of soloist Carolyn Sampson’s soprano, floating like a ministering angel. Masaaki Suzuki’s meticulous attention to detail, so rewarding in his remarkable Bach recordings, shines throughout this disc, the playing alert, the choir responsive, the soloists thrilling. And there is the bonus of an exhilarating Exsultate, Jubilate with Sampson on top form.
Details 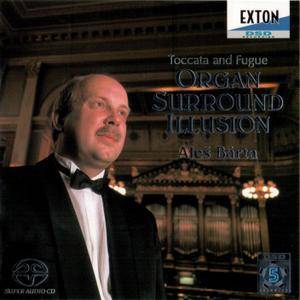 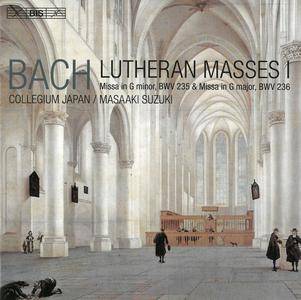 Bach Collegium Japan, Masaaki Suzuki - Johann Sebastian Bach: Lutheran Masses, Vol. 1 (2015)
EAC | FLAC | Image (Cue&Log) ~ 319 Mb | Mp3 (CBR320) ~ 150 Mb | Scans ~ 41 Mb
Genre: Classical, Choral | Label: BIS | # BIS-2081 | Time: 01:05:30
The Reformations fundamental alterations to traditional forms of church service, had, by Bach's time, resulted in German churches Latin yielding to the country's own language. To a limited extent, however, the Latin mass text did remain in use in the Protestant church in particular the Kyrie and Gloria sections. Termed Missa to differentiate them from complete settings, these pieces are often referred to now as 'Lutheran Masses'. Bach's famous Mass in B minor began its existence as a work of this type, and four other examples from Bach's pen have survived. Newly performed and recorded by Bach Collegium Japan under the direction of Masaaki Suzuki, the Missae BWV 235 and 236 are here combined with four separate settings of the Sanctus. Two of these are original works, whereas BWV 241, and possibly also 240, is an arrangement of another composers setting. The 'KyrieChriste' BWV Anh 26 is an example of how Bach used music by other composers, in this case by his Neapolitan contemporary Francesco Durante.
Details 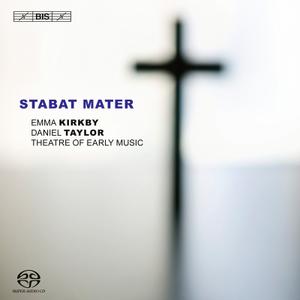 Emma Kirkby, Daniel Taylor, Theatre Of Early Music - Vivaldi, Pergolesi, Bach: Stabat Mater (2009)
SACD Rip | SACD ISO | DST64 2.0 & 5.0 > 1-bit/2.8224 MHz | 74:50 minutes | Scans included | 3,57 GB
or DSD64 2.0 Stereo (from SACD-ISO to Tracks.dsf) > 1-bit/2.8224 MHz | Full Scans included | 1,65 GB
or FLAC Stereo (carefully converted & encoded to tracks) 24bit/44,1 kHz | Full Scans included | 695 MB
DSD Recording | Features Stereo and Multichannel Surround Sound | Label: BIS Records AB # BIS-1546
With a disc entitled Stabat Mater and featuring Pergolesi among the composers, it would be natural to expect his setting of this heartfelt meditation on the grief of the Virgin Mary to be included in the programme. Well, it isn’t – and it is! Only a few years after Pergolesi in 1736 had composed his Stabat Mater, JS Bach made an adaptation of it using a contemporary German version of the biblical Psalm 51. To suit the requirements of the new text Bach made certain alterations to Pergolesi’s vocal parts, but retained the scheme of solo arias and duets between a soprano and an alto voice. He also added a new, independent viola part to the score and rewrote the basso continuo, giving the work a new harmonic vitality.
Details 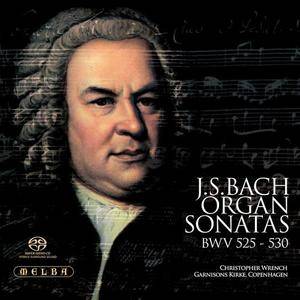 Christopher Wrench commands a broad solo repertoire including the complete organ works of Bach, whilst also working as a liturgical musician, pedagogue & chamber player. He teaches organ at the Queensland Conservatorium Griffith University & directs the music programme at St Mary’s Anglican Church, Kangaroo Point in Brisbane. In 2008 he was awarded the Lord Mayor’s Australia Day Cultural Award for his outstanding contribution to the musical life of Brisbane. 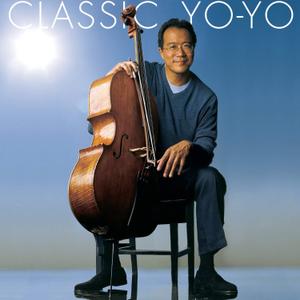 Yo-Yo Ma - Classic Yo-Yo (2001) [Reissue 2016]
SACD Rip | SACD ISO | DSD64 2.0 > 1-bit/2.8224 MHz | 69:27 minutes | Scans NOT included | 1,79 GB
or FLAC 2.0 (converted with foobar2000 to tracks) 24bit/48 kHz | Front, Scans NOT included | 729 MB
Sony Music Hong Kong (SACD Reissue)
Classic Yo-Yo is a greatest-hits collection for the famous Yo-Yo Ma, something he's fully entitled to after two decades of runaway success. It's "Classic Yo-Yo" in the sense that it presents well-loved and presumably durable selections from a variety of Yo-Yo Ma albums, not because it inclines toward Ma's straight-ahead classical recordings. In fact the division between classical and crossover pieces on the disc is about 50/50, and they tend to alternate. The transition from Bach to Astor Piazzolla works OK, but that from Appalachian Journey mastermind Edgar Meyer to Brahms might be a bit jarring. A greatest-hits album is a tough item for Ma because his recordings are so different from one another and involve such a variety of other musicians. As Ma himself says in an interview included in the liner material, "Collaboration is the best part of what I do, it's what I enjoy most about being a musician".
Details 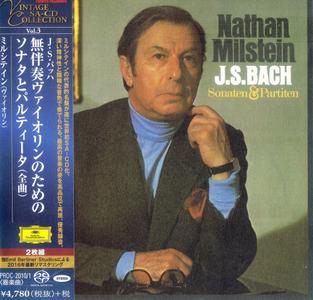 Nathan Milstein - JS Bach: Sonatas and Partitas for Solo Violin BWV 1001-1006 (1975) [Japan 2017]
SACD Rip | 2x SACD ISO | DSD64 2.0 > 1-bit/2.8224 MHz | 125:44 minutes | Some Scans included | 3,45 GB
or FLAC 2.0 Stereo (converted with foobar2000 to tracks) 24bit/96 kHz | Some Scans included | 2,98 GB
The late Nathan Milstein’s 1973 stereo remake (of his mid-Fifties New York recordings) was his own preferred version of these pillars of the violin repertoire with which he had been so associated since his youth in Odessa. These are epic virtuoso performances justifying Milstein’s view that with this music the performer could "bask in the most glamorous light". Stylistically, purists will object to their expressive liberty and gesture. But few will be able to resist their artistry or intensity of delivery. This album won Grammy in Best Classical Instrumental Solo Recording category (1975).
Details 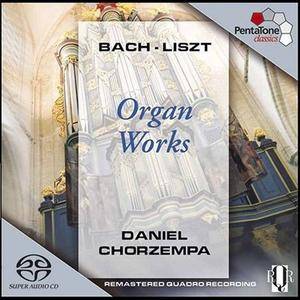 This SACD from PentaTone was recorded originally in 1970, not long after he’d made his official debut as an organist. (His organ recitals are notable for being played from memory.) The performances were taken down in the then-new quadraphonic system & released on Philips LPs. But of course quadraphonic LPs were a less than ideal carrier for the 4ch sound on the tapes. Fortunately PentaTone, a company founded by ex-Philips personnel, has been reissuing quad recordings on SACDs remastered from those tapes & they sound spectacularly lifelike. They are, of course, in 4ch sound, not the 6ch that the modern SACD system is capable of.