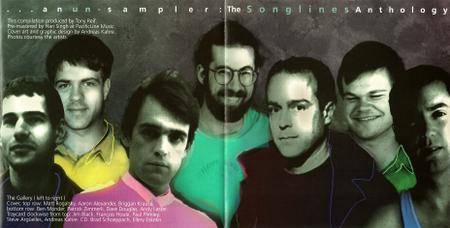 This is the right way for a label to record an anthology of tracks featuring its artists. First, eleven outstanding groups are featured. Second, the anthology includes pieces never before released on CD, rather than selections from previously issued CDs. The exquisite production and extensive liner notes with full discographical information and bonus bibliography make this a "must-buy" for lovers of adventurous jazz. Among the artists represented are trumpeter Dave Douglas, pianist Paul Plimley, clarinetist François Houle, tenor saxophonist Ellery Eskelin, guitarist Ben Monder, and alto saxophonist Briggan Krauss. With a lineup of that caliber, it is no wonder Songlines has emerged as one of the world's up-and-coming small jazz labels. Kudos to producer Tony Rief for fulfilling an ambitious vision.

Alto/baritone saxophonist and composer Andy Laster was born in 1961, grew up on Long Island, and studied jazz at Seattle's Cornish Institute before moving to New York City in 1985. His first recording, Hippo Stomp, appeared on the Sound Aspects label in 1989. This album was followed by two more Sound Aspects releases, Twirler (1990) and the first eponymously named CD by Hydra (1994), one of Laster's key ongoing projects. During the 1990s Laster emerged as a unique and significant voice on the so-called "New York downtown music scene" that has also served as a launching pad for musicians like Dave Douglas, Tim Berne, and John Zorn.